Artist Vince Caruana (b.1979) is best known for the overlaying of 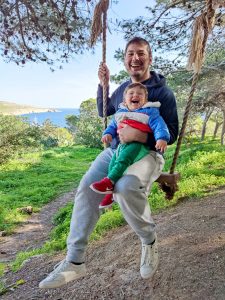 geometric planes and the prominence of colour in his contemporary works. Recognised for his crispy, clean paintings, reminiscent of Cubists’, the artist’s fascination with creating light adds another dimension to his works. Often described as mesmerising, glowing, ethereal, his art conveys a spiritual sense to the viewer, as if to evoke the artist’s relationship between artistic expression and spirituality.

Although Caruana works predominantly in the medium of painting, his works include lenticulars, large scale murals and bronze reliefs.

Caruana studied at the Malta School of Art, Penn Foster College (Scranton, P.A., USA), the Libera Accademia di Belle Arti (Florence, Italy) and at the Slade School of Fine Art (University College of London, U.K.). He has set up the Gozo Visual & Performing Arts School and occupies a headship position of this educational institution.

He has had several solo shows, participated in some major international collectives and is the recipient of distinct awards. Caruana’s work can be found in many public, private and corporate collections throughout the world. An artist by profession, Caruana lives and works in Gozo.

Vince Caruana works predominantly in the medium of painting with his primary concerns being colour, geometry, space and light. Broad washes of translucent pigment often forge geometric forms and spaces to convey a seemingly floating image despite its underlying realism. The strong palette of colours and the dynamic interplay of overlaying transparent layers create an almost spiritual light in his paintings, often evoking the artist’s relationship between spirituality and artistic expression.